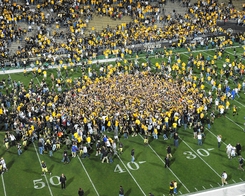 The final play has been made. The clock is still running down. The game is not technically over. Yet, what happens? Everyone starts running and jumping and cheering. Confetti machines spew bits of colored paper from every direction. A coach finds himself drenched in Gatorade. The crowd rushes the field in celebration. But the clock is still running. There comes a time when the realization dawns that although the clock may not say it’s over, IT IS OVER! You have WON! There is not a possibility any longer of defeat!

2 Corinthians 2:14 “But thanks be to God, Who in Christ ALWAYS leads us in TRIUMPH [as trophies of Christ’s VICTORY] and through us spreads and makes evident the fragrance of the knowledge of God everywhere.” (AMP)

No matter what you may be facing on the battlefield of life today, remind yourself of the VICTORY that is ALREADY yours! The clock is just running down. God has already won the trophy for you! Remind yourself of who you are and Whose you are! We are only an occupying army, called to enforce a victory already won. Tell the devil that time is running out for him! You only need to stand strong. Stand your ground. Declare by faith the promise from His Word that proves your victory. God has authorized you to REJOICE, to sing and shout even before the clock shows it’s over! He’s given us permission to dance in the end-zone! To stand tall in the face of our enemy and lift our arms in the sign of the letter ‘V’ symbolizing our VICTORY! He authorizes you to RUSH THE FIELD!